The Google Dino Game (also known as T-Rex game) is the favorite time killer when your Internet goes down! This easy yet interesting no internet game will definitely help you lower your stress levels on a rough day. 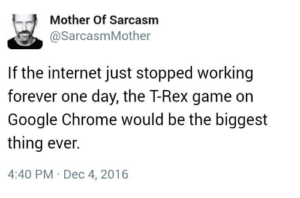 Guess What? Now you can play Google Chrome Dino Game even when you are online. Thanks to the T-Rex game offline hack which was extracted from Chromium. Check out some interesting details about this 8-Bit dinosaur game that will help you score higher.

The game is hidden on the 'Network Error' page, which was aimed to divert the user's attention while the Internet issue gets resolved.

A Google designer, Sebastian Gabriel, designed the Dino game for Google Chrome. And most probably, he didn't even realise that it will become so much popular.

This game is a simple side-scrolling game featuring a running dinosaur called 'Lonely T-Rex' in a desert. You must avoid the cacti by jumping over them. If you touch them, you die.

In a recent update by Chrome, the developers introduced flying Pterodactyls in the game to raise the difficulty levels. These will appear once you reach past the score of 450. You can either avoid them by jumping or by crouching while they pass over you. So, guys are you ready for a cool dino run?

A quick fact for all the offline dino game lovers, t rex game got its nickname as 'Project Bolan', which is in honor of Marc Bolan who is the lead representative of "T-Rex", a well-known rock band of the 1970s.

Also, while making the game, the creators thought of putting up more features like roaring and kicking, but later on, this idea got refused to keep the game controls simple and easy to execute.

Well, it is a very simple game to play with no complicated control. Here's how you can play Dinosaur Game even when your internet is working.

So how much do you think you can score? Maybe a few hundred or a couple thousand. But what if I tell you there is more to this simple-looking chrome dino! Read further for some amazing T-Rex game hacks.

Know the Hacks of Dino Game

We all know every Gamer loves cheat codes because basic gaming is too old school! We do everything to push the limits and the reason they hacked the T-Rex game from Google Chrome.

To apply the hacks, open the webpage in 'Inspect element' mode using Right Click > Inspect Element or by pressing the Ctrl+Shift+I combination. After opening, Go to the 'Console' section. That's where the magic happens!!

Speed Hack: There is a hack for changing the speed of running T-Rex in the game. You can change the running speed by typing the following line of code in the Console section and press Enter.

Immortality Hack:By now you must know that the only to reach a high-score is to NOT Die. Well, make can make this wish of you all come true. Using the following code lines will override the function that handles the life of the t-rex.

Why play the game on dinogame.net?

Well, we have created this portal for all those T-Rex game fans who just can't have enough of this no internet dinosaur gameplay now feature available on dinogame.net no matter what. Keeping in mind the comfort of players, we made the best we can. Here's why.

Chrome's dino game does not actually have an ending. The game keeps running till the score reaches 99999 and then instead of ending, the game resets to 0 but the speed is increased to 6000.

Those who might wonder why dino game cannot end, Edward Jung (one of the developers of this game), has said that it would take 17 million years of game time to actually finish the game.

Google recently celebrated the 10th anniversary of Google Chrome and as a part of the celebration, Google gives a party hat to its famous T-Rex dino along with birthday cakes and balloons.

Dead Zebra, the leading production company announced on the 10th anniversary of chrome that they will start producing a plastic toy set based on the Chrome browser's offline google dinosaur game.

Do you know what is the highest score on dinosaur game?

How do you turn on the dinosaur game if it is turned off?

Although it is very difficult to achieve, but onnce you reach the score of 99999 in Chrome Dino game, it resets score to 0 and the speed of dinosaur is changed to 6000.

How long does it take to finish the dino game??

According to official statement of Edward Jung, it will take approximately 17 million years to finish the dino game. This is the same amount of time the real t-rex dinosaurs were alive on the planet.